I am very interested by the zymkey 4i product, especially by the physical tamper protection.

But I have few question:

I readed in the RTC tutorial that the coin cell only serves for the RTC, does it mean than the perimeter detection is only working when the zymkey is powered on thanks to my raspberry? In this case, how to protect from an attacker who would destroy the “enclosure” of my system while it is powered off, and also the perimeter two perimeters loop circuits? I mean, in “therory”, I guess it could easily identify the zimkey, and juste put two illegitimate loops circuit in the receptacle, to fake the zimkey before to put the system on again. Am I wrong? or maybe I am missing something?

In this case, does it mean the perimeter features is “nothing” without a strong “physical” protection like expoxy on the SD and the zymkey? So why to not use the coin cell to make the perimeter protection always activated?

By the way, is it possible to extend the RTC battery life, for example if I put many CR2032 coins in parallel?

And to finish, do you know when you could be able to release application examples and dev kits for the perimeter detection?

By the way, your product looks really cool, good job!

Thanks for your interest.

Ok thanks for the quick answer! I am glad to see I was misunderstood haha.
And sorry for my mistake about the coin model.

No apologies required. We are hear to help !

Hi,
do you have any news about some applications notes release for perimeter detect?
Thanks by advance

Putting together a general use case app note always takes longer than a specific use case, so sorry for the delay. We should having something up next week.

Ok cool, I will wait!
Thx

From the initial specs I read “Optional accelerometer detects shock and orientation change events”. How can I use acceleromoter? Is this one of the two perimeters loops? What means optional? I am interested in ZYMKEY 4i.
Thanks.

If you bought the Zymkey 4i, the accellerometer comes as standard.

You will find details of how to use the accellerometer in the documentation, here: API Documentation 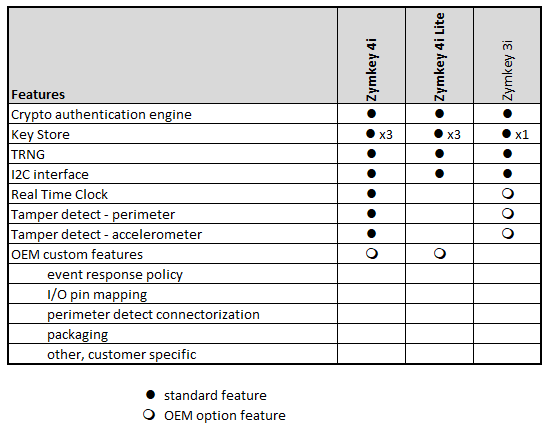 Thanks, I understand acceleremeter is device integrated and doesn’t use(occupies) any of the two perimeter loop circuits
.
From introduction I also read “Power rail monitor detects anomolies like brown-out events”. I can not find any reference in the API documentation, can you tell me where to read about? Is this the mechanism used by perimeter loop system or something I can check from the API?

Your Zymkey contains three different layers of Tamper Detection. Each operates independent of the other:

While waiting for the sample app, if USB is open (nothing connected) and run a script with these commands, should event happen?:
zymkey.client.clear_perimeter_detect_info()
zymkey.client.wait_for_perimeter_event ()

Happy to hear you found the solution.

it’s me again, for few questions.

I am trying to execute a periodic check of the PERIM1 circuit.
The code below works well during first rounds, but suddenly the breach action is not anymore detected.
After few minutes, it start to work well again, etc. If I reboot the pi, the code will works directly (during few rounds again).

I simply connect a USB cable with white and black wires connected, and make them touch themselves during the tests. I can’t see anything wrong in /var/log/syslog.

Is this my routine code which is not the best way to check the perimeter loop? Why is my zymkey just “stop to work” during few minutes? Should I use “zkWaitForPerimeterEvent(ctx, 0);” ?

By the way, in the code below the “num_timestamps” value is ALWAYS equal to “2”. Why 2 whereas I only set an action for the PERIM1 circuit and not PERIM2?