Today I was working on my 3 raspberries when I had to reboot one of them. After rebooting, my boot was stucked with the message below after the bootloader:

After restarting all my rpi4, I noticed that they were all blocked with the same behavior

My problem seems similar to this thread:

I ran into a weird issue when my Raspberry Pi 4 updated itself. This Pi is setup with a Zymkey in developer mode and a LUKS encrypted system running Ubuntu Server 20. I have the unattended-updates package setup to install security updates and reboot my device. After the reboot, my device would no longer boot up. It prints a single message after the bootloader “Could not get clk -51”. I’ve since reflashed the sd card and it is now working fine. Now like I said this system is in developer mode. I…

I would like to overcome this without reflashing the SD card but more important: understand why it happened?

I checked my power supply to see if it the voltage and the quality is ok and unfortunately I discovered that power was reaching peaks at 5,30v which is above 5,25v (Overvoltage). See the topic below:

Applicable Products The information included in this post applies to all Zymbit security modules. Power & Security Poor power quality can result in unstable and potentially insecure operation of your single board computer (SBC), depending upon it’s design, operating conditions and related system and power components. In this post we will outline the important factors of power quality management and explain how Zymkey manages the security of your device when power quality is poor. Power Qua…

I then used a lab power supply calibrated to 5v to be sure signal is fine and started the rpi4. Problem is still there.

I did long configuration work on these platform and would like to get the system back up and running without re-flashing the SD card. Would it be possible?
What could have gone wrong here since I did not worked on the two other tablets?

I would really appreciate any help, thank you in advance

It looks like when I reproduced this, it continued on after 10 seconds or so and booted. Can you wait for 30 seconds or so and see if you boot or get any additional output? I’m curious about the message right after that one if you see anything.

Thank you for your message.

Can you wait for 30 seconds or so and see if you boot or get any additional output?

→ Left it on for at least one hour: Nothing happens, it hangs, no keyboard input press is possible, CTRL+ALT+DEL does not reboot.

I attach a picture of the boot message at the beginning: 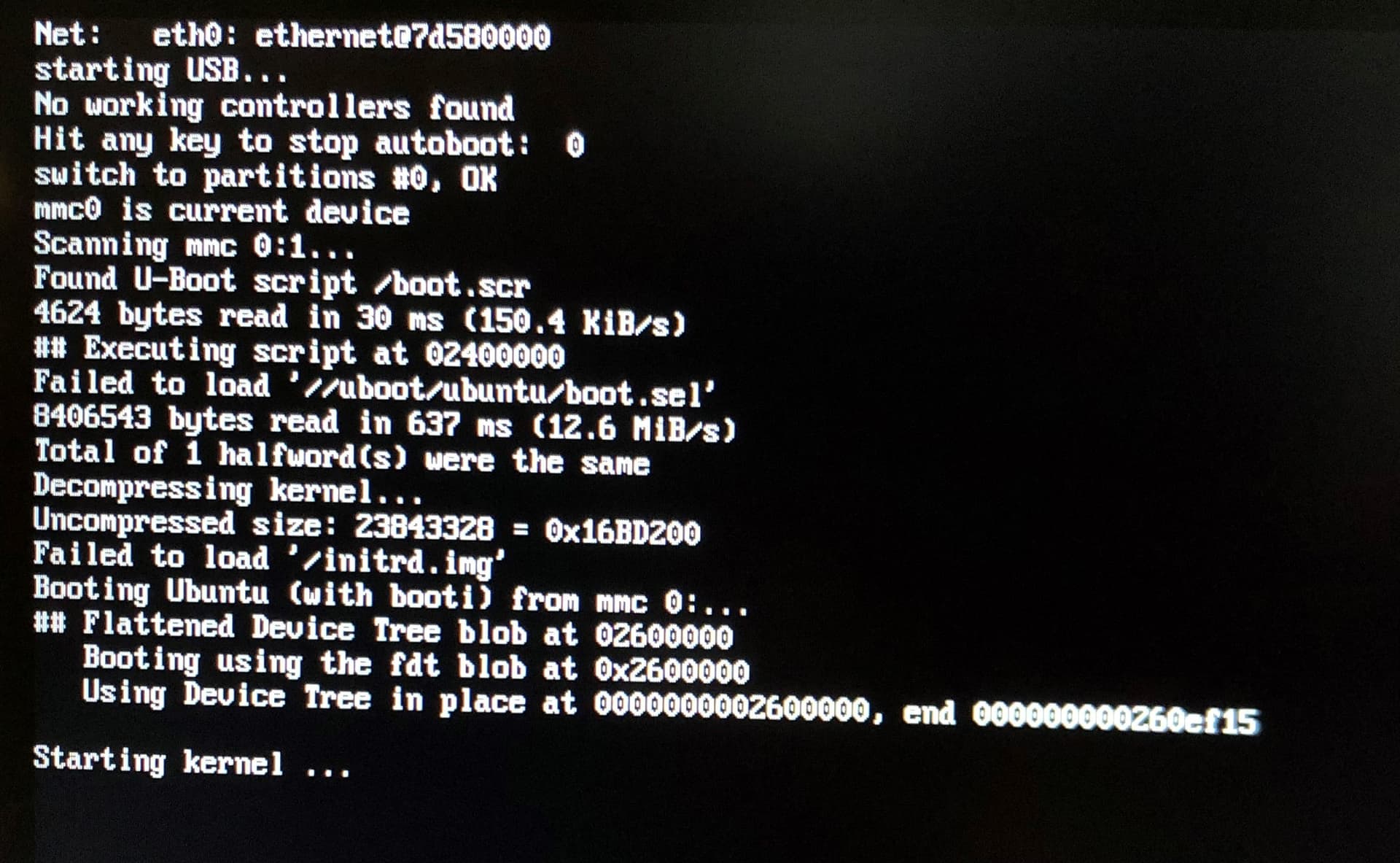 Could you please answer my questions from my first post?

Thank you so much!
Gilles

I’m going to follow up with you directly via email for now rather than here in the community since I cannot currently reproduce this issue and we may go back and forth a few times.

I’ll try my best to address any questions from both posts. I will edit these later to be more helpful once we figure out what happened. Answers for now:

I’ll update this post once we determine what changed during the upgrade of ubuntu for others in the Community.

After a few weeks of using the zymkey without any issue, I’m back here to conclude on this topic.

First @Bob_of_Zymbit I’d like to thank you for your quick reply and our conversation by mail! It was really helpful.

We noticed that the issue was due to the init ram disk file (initrd.img) that changed. In fact, if the system is upgraded or if a system package is added. It might be possible that the initrd file is rebuild with new tools or new files. If the file changed, the zymkey sees this change as “tempering” and therefore forbids the OS to boot…

To mitigate this issue, remove the service unattended-upgrades:

To be sure the partition mmcblk0p2 (system-boot) is not modified, load it with read-only by adding ro after defaults in /etc/fstab
→ afterwards reboot the system.

To check that your kernel stayed unchanged, use:
uname -r

Thank you for sharing your findings, and that it’s related to kernel upgrades. That may point to how to fix this, e.g. with a hook on apt upgrade to ask the zymbit to rekey.

@kontrasec thanks for your message

I think we may get an answer from @Bob_of_Zymbit?

from my point of view, this is bypassing the secure boot of zymkey because then someone could make changes in the boot files without me noticing it …
I think the best is to re-deploy an OS with correct packages and versions or use docker images if a newer system is necessary.

I may be wrong!
looking forward to your security expert advises

Looking through the installation scripts, at first blush it appears as if there’s provisions for hooking when the kernel updates.

and /usr/sbin/update_encr_initrd. Though, I haven’t spotted the exact binding calls yet - more reading, another time is needed.

Popping open the signed image (tar gz) referenced by the script, the next clue for where the magic happens is in conv_edev_rfs/opt/zk_luks/scripts/create_zk_crypt_vol:122:

The update logic to repair (create?) would be an apt-upgrade hook to zkunlockifs the wrapped LUKS key at /var/lib/zymbit/key.bin.lock, rebind the zymbit key to the newly updated OS, and then zklockifs the same LUKS key to a newly-wrapped file at the same location.

My understanding of the module design means that this will only work when the zymbit key is in development mode - production mode, sealed is sealed. This may meet what Gilles brings up, I think.

I present my mitigation for device bricking. This is quite primitive for now, but it allows you to use a fallback LUKS password to get back into the workstation.

Bake:
sudo update-initramfs -u -k all

I have tested this fallback mechanism with ubuntu 20.04 LTS on an rpi4 4gb. In the event the zymbit refuses to pop open the boot disk, or you physically pull the zymbit off of the rpi4, you can enter your fallback LUKS password and get back in.

I tried to apply your mitigation and it was fine when unplugging the zymkey module but… in my issue, I noticed that initrd.img was missing on my boot partition (mmcblk0p1) after the upgrade leading to this “bricking issue”

for reference, I updated a single packet to reduce the scope of my issue, I therefore tried:
sudo apt install linux-raspi

After you pinpointing the zymbit scripts and a few days understanding them, I found the following to be really interesting: /usr/sbin/update_encr_initrd

I took the logs of apt to seek for any of these echo messages from the scripts and look what I found:
apt-logs.zip (16.0 KB)

From the script, I could match that line:

Which led me to the question: Why the request would mismatch in case of an upgrade?
I could solve my issue by manually rebuilding the kernel:
sudo update-initramfs -v -c -k 5.4.0-1056-raspi -b /mnt/boot

I fear that this hook was only there for the usb key migration and not for an upgrade…
I plan to restore my backup, patch the script without any exit preventing update-initramfs to do its job.
The code is the following:

More on this next week. Thanks again Kontrasec for your support

Here is my last post with the solution to be able to upgrade your kernel without bricking the system (missing initrd.img file in /boot/firmware).

What is happening:
Hook file modified in /etc/kernel/postinst.d/initramfs-tools is problematic:

→ I think there is a good reason to do it for the zymkey installation? But this is not suitable afterwards.